Ireland’s Fiddlers Green the Best of

A number of the original recordings of the popular Irish folk band Fiddlers Green from the 1980’s and 90’s have been transferred from reel to reel and DAT onto CD and digitally produced, combined with some original recordings from Danny Carthy’s solo Album who was lead singer with the band. Some of the finest producers – Eamon Campbell (The Dubliners), Charlie McGettigan Eurovision Winner), Denis Allen (Limerick you’re a Lady) and Peter Eades (Jump the Gun) – were part of helping to create and produce the individual recordings that are now combined on the Album – Ireland’s Fiddlers Green the Best of – and also showing that the recordings have withstood the test of time in terms of quality and digital production.

The Album has an amazing mix of originality and old which includes songs like – Stand Look around you, Carlingford, Little Balls of Twine, and The Punchestown Races written and composed by Danny Carthy, Slip Away written by Bobby Whitlock , Deportees by Woodie Guthrie and I’ll be your Baby Tonight written by Bob Dylan. With songs like Lamplighting Time in the Valley, The Hills of Connemara, The Butcher Boy and My Westering Home, My Own Dear Galway Bay this CD has all the qualities of combining the Irish and American cultural music in a cross over with a strong touch of Folk for continuous enjoyment. This Album is an introduction once again to the audience who have fond memories of Ireland’s Fiddlers Green performances in the past, and also an induction to a new generation of folk lovers. The recordings are available on Apple iTunes. 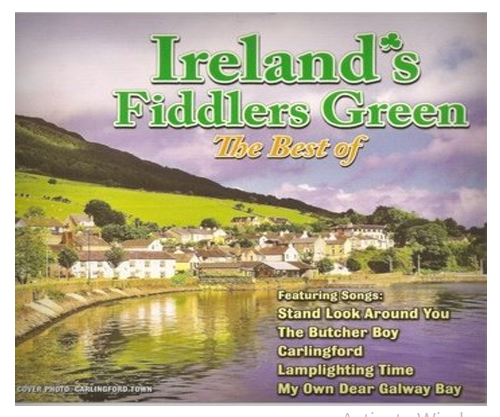 STAND LOOK AROUND YOU (PREVIEW)

MY OWN DEAR GALWAY BAY (PREVIEW)

THE HILLS OF CONNEMARA (PREVIEW)

I’LL BE YOUR BABY TONIGHT (PREVIEW)

DRINK IT UP MEN (PREVIEW)

HE WILL BE REMEMBERED (PREVIEW)